West Rock Ridge State Park is located in Hamden and New Haven, Connecticut (with small portions in Woodbridge and Bethany). West Rock Ridge is the second largest state park in Connecticut with 1,792 acres of land (and growing).*
There are many recreational opportunities available at West Rock.

This website has pages arranged by topic. Click on the web page name below or the links at the right to access the page that interests you.

(This website was started on Saturday, Sept. 4, 2010.
The most recent update took place Thursday, Jan. 20, 2022. Despite the domain name, this an informational website, not a blog.)

This zoomed view of the West River Memorial Park, off Route 1 in New Haven, beautifully displays the south face of West Rock. The New Haven Park Department created this channel along the river, likely in part to highlight the view. What the view actually looks like can be seen below. 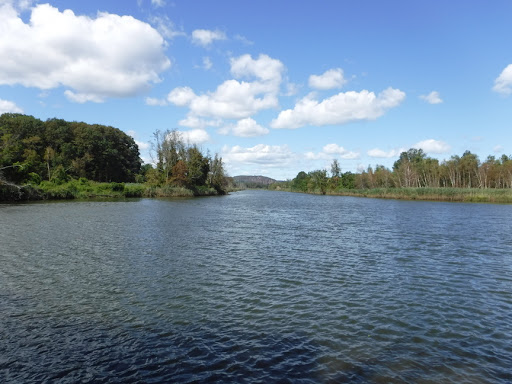 Trail Report for 2021 Posted
The trail report for 2021 projects at West Rock has been posted to the page West Rock News Updates: https://westrocktrails.blogspot.com/p/news-updates.html
Regicide Drive Closed Until May 2022
The gate to the main entrance at 1134 Wintergreen Ave., New Haven, which provides access to Regicide Drive leading to Judges Cave and the South Overlook, closed for the season on Monday, Nov. 1 and will be closed until the Saturday of Memorial Day Weekend in 2022. This means walkers, hikers, and cyclists can enjoy the road without motor vehicles.
Those looking to hike up from the main entrance can find nearby parking on adjacent side streets or at the West Rock Nature Center.
Download a West Rock map from the state website
Before heading out into the woods, be sure to download a map of West Rock from the state website. When I read negative comments about the park on websites like Trip Advisor and Yelp from people who have trouble finding their way, it is obvious they did not bring a map with them. Keep in mind that the trail marked Gold on the current map is now blazed Blue-White. I have asked the state to update the map, but have no idea when that will happen.
Link for a full-color printable map:
https://portal.ct.gov/-/media/DEEP/stateparks/maps/WestRockParkmappdf.pdf?la=en
Link to the GPS friendly map, which can be used on a smart phone: https://portal.ct.gov/-/media/DEEP/stateparks/maps/WestRockGPSpdf.pdf?la=en
West Rock page:https://portal.ct.gov/DEEP/State-Parks/Parks/West-Rock-Ridge-State-Park
Don't Create Illegal Trails or Cut Across Switchbacks
Managing user behavior is a continuing challenge in parks as people wander off trail and leave a dirt path in their wake, killing any plants living there. This can take the form of people who who create new, unauthorized trails, cut across switchbacks, or take a shortcut through the woods.
Illegal trails have been sprouting at West Rock, with volunteers blocking off four of them. I am not describing their location because I do not want people to seek them to explore or uncover them. Blocking off trails is time consuming work that takes away from other trail projects.
Although they had been in place for only a few months, two of them were showing signs of erosion. I estimate the slope in those areas is 20 percent, which is too steep for a sustainable trail without extensive switchbacking. One of those trails was built by a runner who advertised it on Strava, and agreed to stop using and promoting the trail after being told what he did was illegal.
On an April morning while working on the Regicides Trail, another volunteer and I spent more than an hour blocking off two cut throughs that people had made on a switchback. In this area, the trail flows through two turns, using the natural landscape. The two cut throughs changed a flowing trail into a rock scramble, while also eroding the two cut through spots. To reach this spot involves a hike of several miles, so saving 200 feet of walking is pointless.
Along the Regicides Trail, I have seen places where people cut through the woods, trampling vegetation, and leaving a dirt desert in their wake, to save walking along 100 feet along the trail to where it actually comes out to the road. In one spot, numerous wildflowers were growing next to the dirt path. I imagine flowers once grew in the trampled section. Please stay on the trail!!!
I have also heard a report of bikers cutting trees and building trails with ramps within the park. West Rock is a natural area, not a playground.

If the parking lot at Lake Wintergreen is full, these are some nearby options:

The first is Valerie Court, located only 0.1 miles away toward Wintergreen Avenue.

The other is Wintergreen Elementary School at 670 Wintergreen Avenue, Hamden, near the turn for Main Street, which is a 0.25-mile walk. While there are no sidewalks on either street, there is a flat shoulder to walk adjacent to the road for the short distance. This particularly good for those who are bicycling at the park because it's such a short distance to ride to reach the park.

These are better options to park for cars because there is no risk of being clipped by a passing vehicle trying to squeeze past. For the people exiting the cars, they are not standing in the brush on the passenger side, or in the travel lane on the driver’s side.

The Wintergreen Elementary School building is not actually an elementary school, but is the home to two Hamden Public Schools programs: the Alice Peck Learning Center (an early childhood program) and the Hamden Collaborative Learning Center (an alternative high school).

For those planning on hiking to the South Overlook or Judges Cave, there is plenty of parking behind the New Haven Montessori School, 495 Blake St., at the south end of the park.

People who park at the main entrance may wonder why the parking lot there is always blocked by a chain. That parking lot is owned and operated by the City of New Haven for the West Rock Nature Center. The city keeps the lot closed because when it is open, miscreants will dump items there, rather than bring them to the transfer station. The city had blocked access to most of the other parking lot with jersey barriers for the same reason, but in August 2021, pushed back those barriers to allow more parking.

Safety Improvements Announced for West Rock Tunnel (Heroes Tunnel)
The state has announced plans to improve safety and ventilation in the existing tubes of the West Rock Tunnel (Heroes Tunnel), postponing a longer-term plan to widen the existing structure. The safety plans are summarized on this website on the page: West Rock Tunnel (Heroes Tunnel): Safety Improvements. Plans for the larger project are on the page West Rock Tunnel (Heroes Tunnel). Links are to the right and below.
Blue-White Replaces Gold on Water Tank Trail
The trail color on the trail from Lake Wintergreen to the water tank and up the ridge to Baldwin Drive and the Blue-Blazed Regicides Trail changed to Blue-White from Gold on Aug. 18, 2020. I placed signs at the junction with the Regicides Trail and the White Trail to explain the change. I had permission from the state to make the change and submitted a request to the state parks office to update the West Rock map with this change.
Why the change? When I first blazed the trail in 2010, I needed to select a color because the trail had never been blazed. There are only so many basic colors that it is a challenge to find a color to use at a park like West Rock with so many trails. I chose Gold because it seemed distinct enough from other colors and was not being used at the park.
Over the years, I heard enough people refer to the trail as Yellow that I knew I had to make a change. There is already a Yellow Trail at the park, which connects Mountain Road to Baldwin Drive and the Regicides Trail. For someone hiking on Baldwin Drive or the Regicides Trail, this creates potential confusion.
The solution? Use a different color. Why Blue-White? It's simple. The water tank trail connects the Blue-Blazed Regicides Trail to the White Trail at the base of the ridge. The Blue-White Trail is the most direct connection to the Regicides Trail and Baldwin Drive from Lake Wintergreen, which is the main parking area at West Rock.
On a related note, the tree at the junction of the Blue-White and White Trails that had a sign for the Regicides Trail fell down and the Sanford Feeder Trail sign at the junction with the Regicides Trail was knocked off its tree by another tree that fell on it. I reinstalled the signs on trees in both locations. 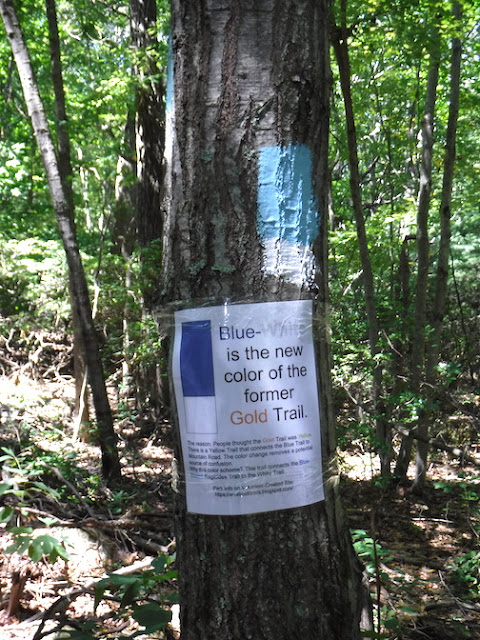 The trail descriptions are spread across so many pages to make the information easier to access.
State Parks by Size
* West Rock is 1,792 acres of state owned land, but there are also parcels that are next to the state owned parcels owned by Hamden, New Haven, and the Hamden Historical Society. If these parcels are included, the park is 1,874 acres.
The largest state park by area is Macedonia Brook State Park in Kent with 2,302 acres.
Sleeping Giant is third in size for state parks with 1,673 acres of property. Gay City places fourth in size with 1,569 acres.
All these state parks are dwarfed Pachaug State Forest in northeastern Connecticut with 28,804 acres, Cockaponset State Forest with 17,186 acres divided among multiple properties in eastern Connecticut, Centennial Watershed State Forest spread over 15,370 acres of current and former watershed land in Fairfield County, Housatonic Meadows in Litchfield County with 10,894 acres, and Meshomasic State Forest, east of the Connecticut River with 9,026 acres.
There are numerous other state forests larger than any state park.

The state of Connecticut continues to add land to West Rock Ridge as it comes on the market (or is donated) and as funds are available for purchase. The legislation that created the park legally requires homeowners within the park's legal boundaries to give the state a right of first refusal for purchase.

What is the difference between a state forest and a state park? There are two basic differences. The state actively manages state forests for both lumber and habitat, cutting areas of trees on a regular basis. The state also allows hunting in state forests, except where they are close to roads and buildings. Hunting is generally prohibited in state parks. One exception is a limited deer hunting season at Colis P. Huntington State Park in Redding/Bethel. The park name is a coincidence, as it was named for its wealthy donor.
Posted by Hiker Tom at 10:00 AM 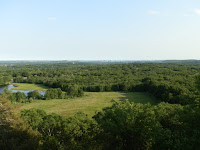 Hiker Tom
Outdoors is the place to be, whether bicycling and kayaking in warmer weather, and hiking in cooler weather. Trail work is an excellent workout year-round. 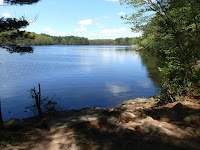 A view of the lake from the southern point in May 2017.